If you’ve made it this far whisky pilgrim, you are halfway to the finish line on our journey. Today’s whisky is the second Kilchoman Kensington Wine Market exclusive single cask to be featured in one of our Whisky Advent Calendars. Last year Islay’s Farm Distillery agreed to bottle both Loch Gorm and our Kilchoman 2010 KWM Cask 440 in 50ml bottles, just for the Advent Calendar. There are not many distilleries willing to sell single casks to retailers these days, and there are even fewer who would go one step further and agree to going to trouble of bottling 50mls of your exclusive cask for you. To say the least, we think pretty highly of the team at Kilchoman, and it is not just because we love the whisky.

In September of 2006 I made my whisky pilgrimage to Scotland, including the fabled Isle of Islay and Kilchoman Distillery. I fell head over heels in love with Scotch whisky. Over the last decade I’ve had a front row seat for the industry’s Golden Age, and it has been quite a journey. The industry’s growth and evolution have been exciting to watch, and this is especially true of Kilchoman. When I first visited in 2006, the distillery had been in production for just over a year. Its first ever release of single malt whisky (a 3 year old) wouldn’t be bottled for another three. A lot has changed since then.

The first barrel of Kilchoman ever filled, 1+ years old in 2006!

The distillery is still small, but it is growing. In 2015 Kilchoman acquired Rockside Farm. In addition to being home to the distillery, the farm also grows barley for the distiller’s 100% Islay range. 100% Islay is produced from Islay barley, malted on site at the distillery. From farm to bottle the whole process of producing 100% Islay takes place within a few kilometers of the distillery. This was founder Anthony Wills’ vision, when he set out to build his own distillery on Islay in the early 2000s.

Until it’s release of Machir Bay in 2012, Kilchoman had no core expressions. Since then they have added Loch Gorm and Sanaig (Day 2) in addition to a number of limited releases and single casks. From 2009 trough 2012 the distillery released seasonal offerings, roughly once a quarter. The distillery’s whiskies were young, but that never seemed to be a problem. Anthony Wills was given some very good advice when he founded the distillery. Starting a distillery from scratch requires an enormous capital investment, and lots of time. Kilchoman would need cash flow to maintain its operations, and therefore it would have to sell its whiskies starting at a very young age. While most whiskies rely on a decade or more in oak to polish their rougher edges (allow the volatiles to burn off, AKA Angel’s Share), Kilchoman’s spirit had to be flawless from day one. The whisky would also have to go into good quality oak, so that it would quickly pick up character and colour from the casks. The advice was a recipe for success. 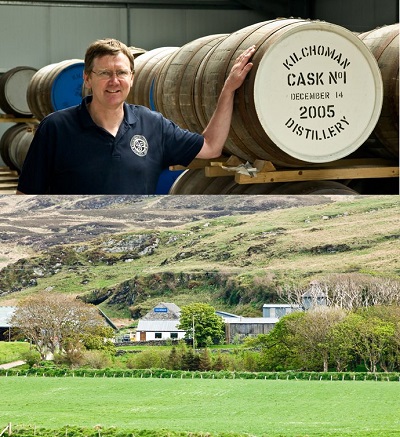 A decade on Kilchoman is still primarily selling whiskies bottled at between 3 and 5 years of age, and the peat heads of the world still can’t get enough. The youth of this smoky spirit has an added benefit. The peat and smoke notes associated with most (but not all) Islay whiskies (and a few others across Scotland) tend to mellow with time. If you like firm smoke and peat, you are better off drinking a younger malt where the oak characteristics have not had as much time to dominate the spirit. This bottling of Kilchoman is our 5th exclusive cask, selected and bottled for the store. Put in to bottle just a week shy of 5 years of age, it is our oldest ever single cask from the distillery. But that is not the only thing which makes it noteworthy, the whisky is also a Pedro Ximenez Sherry Finish. Before finishing in a PX cask, the whisky was first matured in American oak, giving it the best notes of both wood types. It may be an acquired taste… but those who love it (myself included), love it a lot!

PX Sherry Finish – Andrew’s Tasting Note: “Nose: creamy, scallops in burnt butter with lagostines and a glass of off sweet dark sherry; very briny, oily peat and juicy sweet malt; brush smoke, dried dark fruits in maple syrup.Â Palate: round, honeyed and very fruity with loads of malt and building oily peat and firm smoke; doughy, a base of vanilla, more scallops cooked in butter, lagostines and smoked mussels; big chewy peated malt, lovely peat oils and dark spices: licorice and clove; big though the whisky is there is no hiding the fruits ranging from light and soft to dark and dried.Â Finish: medium-long, big but balanced; loads of malt, smoke, maritime notes, peat smoke and spices; maple syrup and dried dark fruits.Â Comment: we love Kilchoman, I don’t know what more to say, other than this is another lovely expression and we know you will love it!” – $160

This entry was posted in Uncategorized. Bookmark the permalink.