Welcome to door number nine in the 2019 KWM Whisky Calendar, which features MacNair’s Lum Reek 12 Year Old. This is the both the second Blended Malt we have had in this years Calendar. Beyond also featuring a portrait of some guy on the label, it likely won’t have much else in common with the first Blended Malt Scotch we tasted back on Day six, which was The Epicurean.

The Some Guy in reference to this label is the titular MacNair – full name Harvey MacNair. Harvey was a distiller and had a company named (wait for it…) Harvey MacNair and Company which was founded in 1857 in Glasgow. In 1911, the company purchased the Elgin Distillery called Benromach, only to sell it on the onset of World War I in 1919.

Harvey MacNair himself was apparently a jaunty chap, so maybe this bottle does have something else in common with The Epicurean. Harvey was a businessman from Glasgow who had a knack for blending whisky. He is known for promoting the natural idea of whisky being released at natural colour. Harvey was the creator of the original Lum Reek, apparently inspired by drinking whisky in a room with a blocked chimney (called a ‘lum’).

The room was filled with smoke, and supposedly instead of expiring from carbon monoxide poisoning, Harvey MacNair was inspired to give a blend the name Lum Reek and create said blend with a peaty style. The name comes from the the Scottish phrase “Lang may yer lum reek”, which translates to “long may your chimney smoke”. This is essentially a toast to someones health. Hopefully that person’s lum is not blocked like Harvey’s was. 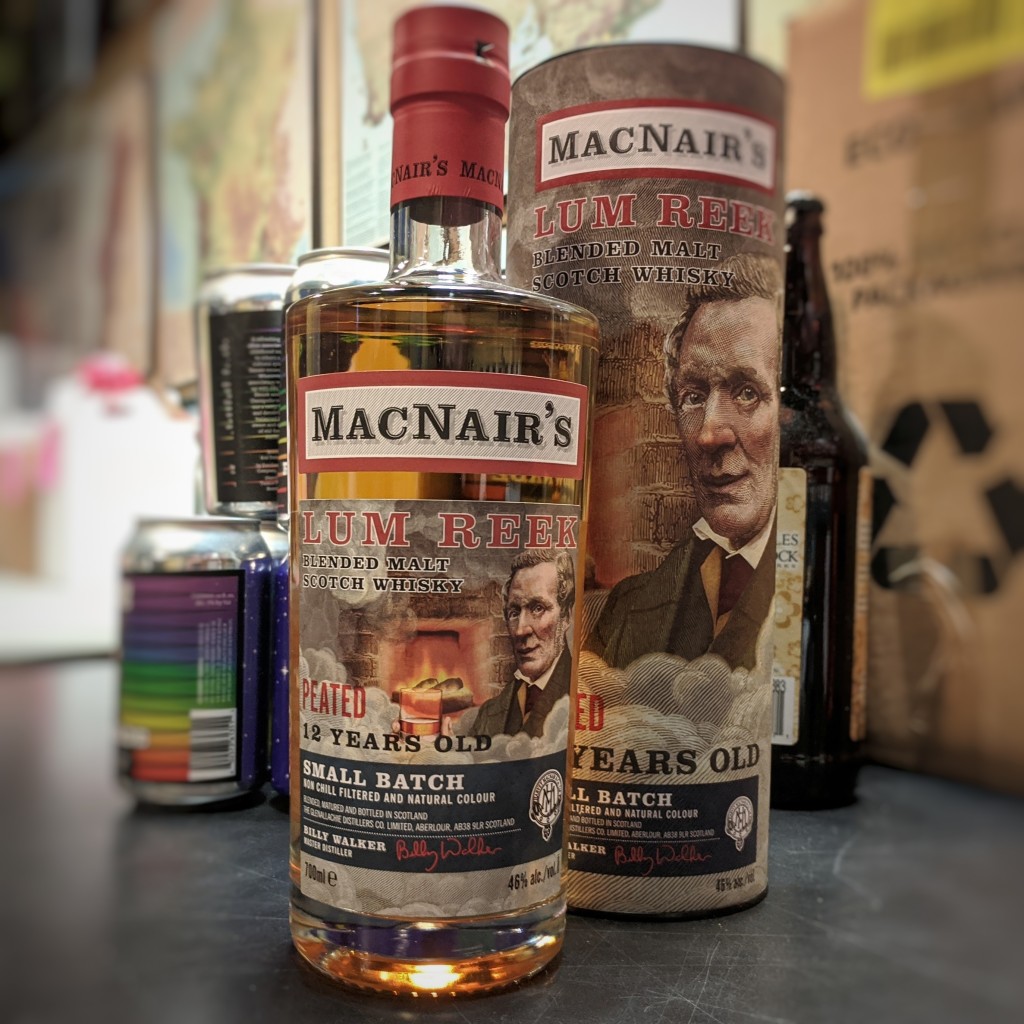 Speaking of Billy Walker, his fingerprints have been all over bottles featured in past KWM Whisky Calendars if you go back through the years. Just last year, we tasted GlenAllachie’s 10 Year Batch Strength and 12 Year Old. In years before, when Billy Walker still was in charge of his previous distilleries’ BenRiach, GlenDronach and Glenglassaugh, we saw many bottles from them as well. These included the BenRiach 10 Year Curiositas, GlenDronach 8 Year Hielan, Glenglassaugh Torfa, and many more.

I say all of this not in hopes of making you yearn for Whisky and Calendars’ of yor, but to underline what kind of pedigree Billy Walker has. When the man creates a whisky, it is worth your time to pay attention and try it out. He seems to know what he is doing.

The MacNair’s brand has been built on the backbone of the GlenAllachie whiskies Billy Walker & Co. acquired as part of the purchase of the distillery, married with Caol Ila. The whiskies in this blended malt were aged in first fill ex-Bourbon, ex-Red Wine and ex-PX Sherry casks. The 12 Year old is bottled at 46% without colouring or chill-filtering.

Finish: It starts a touch smokey, but finishes more peaty. Creamy with some tingle and tannin on the fade, but a nice fruit and salt sticks around.

Comment: Not heavy peat, but enough to be evident. For a twelve year old there is a good amount of nuance. Very nicely put together.

May your chimney smoke rise straight and true, and your carbon monoxide detector remain unbeeping and in good health during these cold winter days. See you again tomorrow for Day ten!

This entry was posted in Whisky, Whisky Advent 2019. Bookmark the permalink.