Words and Pictures by Hunter Sullivan

Grain whiskies have longÂ maintained a mistress like identity amongst single malt fans, leading to a widespread disinterest in bottlings of non-barley origin. Luckily, for those uninitiated, the booming industry has elevated the status of grain whiskies and shoved them into the limelight making them remarkably accessible. Though a minor revolution, the quality of grain whisky is now more easily explored and with so many options available, it only makes sense to do an expose on them. A major factor for choosing these specific bottlings for tasting was to show off the different distillery profiles as there are Â reasonable amounts to choose from. The second reason was to show off the major effect of age in barrel and how much of an effect a variety of age expressions would have on these unique spirits. Here’s a peek at what you missed that night. 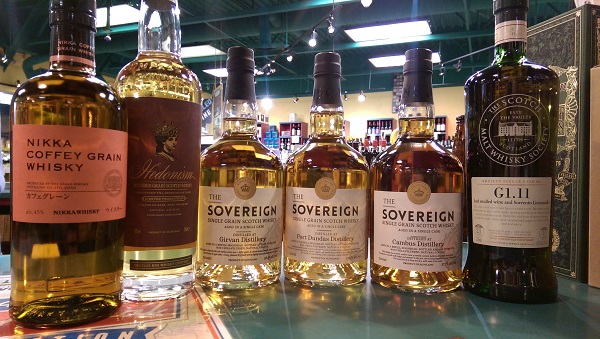 For those lovers of bohemian whisky, Compass Box has got you covered. TheÂ Hedonism is a marriage of select older grain whiskies with an emphasis put on drinkability for the final product. The distillers incorporated into this blend are undisclosed but a whisper has been going around that Girvan is quite heavily invested in this bottling.

A nose of delicacy, lemon lime Mike and Ikes, peppermint andÂ pina colada delicately waft forward. Tasting invokes freshly harvested honey, notes of a tropical vacation by the beach. Veins of vanilla are found throughout the sweetness does not impact the ephemeral nature of this whisky as it floats around the palate. The perfect dram for any whisky new comer and a great value at that.Â Don’t feel guilty if you get through half a bottle in a night.

Unfortunately forÂ theÂ lovers of coffee out there, there is none to be found in this bottle. The coffey titling is meant to be a nod to the style of distillation apparatus used to make this whisky. Named after it’s inventor, Aeneas Coffey, this apparatus or some slight variation of it is widely used by almost all grain distillers on the market. Nikka Coffey Grain, madeÂ almost entirely of corn spirit, provides a bourbon ‘lite’ experienceÂ creating a bridge for the whisky factions of single malt and American whisky to cross over on.

The nose starts off with bourbon character without the spice, sponge toffee, citrus peel and toffee topping. Tasting offers a creamy consistency with thick oils in contrast to the delicate nature of the Hedonism. Vanilla yoghurt with peach fruit a the bottom of the containerÂ offering a nice touch of orchard fruit character. A sultry whisky for after dinner, or breakfast. Your choice.

Moving into the territory of straight grain distillers in Scotland, Port Dundas supplies a massive volume of grain distillate for the makers of blended whisky. Though the quality of these blends is sometimes questionable I would say it is not because of this particular ingredient.

Caramel apples and baking spices greet the nose warmly building into a display of peanut brittle and burgeoning oak. The age is clearly present on this one as the palate leads forward with more oak pleasantries accompanied by it’s guardians, pear and apple. Cinnamon and brown sugar on the finish slowly lead to a wispy ending, leaving an echo of the delights experienced.

Girvan, the producer of many grain spirits including Hendricks Gin, has seen a fair bit of publicity in last couple of years with many older bottlings being sourced from this lowland distiller. A unique taste to boot, I have found Girvan’s spirits to be some of the most interesting and quirky bottlings I have tried in the recent past. Neat fun fact, if you have ever enjoyed Hendrick’s Gin you have also enjoyed Girvan grain spirit.

Bringing this to your nose brings remembrances of butter tarts right out of the oven, baked in nutty characters and treacle all mingling together. Just writing about it makes me want another glass. Cedar in the background, more candied nuts, peeled almonds, burnt molasses and a platter of macaroons move in a fashionable order one after another. A figurative onslaught of delights, the complexity is deep in this one.

Not many forty year old whiskies are available on the market these days. As demand for older whisky grows barrels exceeding a certain age threshold diminish making such rarities increasingly exciting to taste. American oak matured further mounted my intrigue as these sorts of barrels usually end up with a ton of tropical notes which are so illusive in younger whisky.

Nose of…TROPICAL FRUIT! This guy is chock full of mango, dried papaya and hints of passion fruit. Guava and anjou pears sort themselves out amongst the many other shades of fruit, eventually leading into a field of grass and an old farmhouse, decrepit and falling apart in the midst of the overgrown vegetation. Bust open a pack of Swedish berries, candied notes and dried fruit are next, like a trail mix made of an odd assortment of ingredients. Lastly a custardy character rounds off the palate, banana chips and the sweet fruit give way to a touch of barrel tannin, riding off into the distance. Wonderful character and an exciting ride, this is a treasure of a whisky.

From the folks that bring out the kink in whisky, the Scotch Malt Whisky Society has all the bells and whistles when it comes to offering fantastic barrels. What else can be said but the tasting notes of this delightful dram.

From the long extinct Caledonian distillery, this is an heirloom of sorts. Aptly named ‘Curious but Good’, here is what the Panel had to say about it: The shimmering, shape-shifting nose started with wood glue, then cricket bats, cigar boxes and polished furniture, before soaring into crÃ¨me caramel, buttered brioche, vanilla and cafe crÃ¨me â€“ eventually we found tea-smoked duck. Now as a group we could definitely see the wood shop in here, wood being planed and routed, sawdust in the air, glue liberally applied. The sweetness inherent in grain whisky for sure, but I and the group were a little lost on the tea-smoked duck. Coming from someone who hasn’t had tea-smoked duck I can’t testify fully to the fact it wasn’t there, more of which to the fact that I couldn’t find any aquatic avian dish notes in the glass.Â Though this is the case IÂ will wait anxiously for the next time I can sink my teeth into a dish of this sort, for if it is as good as this glass I will be all over it.

Introductions out of the way, here is another unique release from the society. Distillery G1 is another North British single grain single cask.

Named Iced Mulled Wine and Sorrento Limoncello, this bottling is from North British distillation. Here is what the panel got: The initial nose was a combination of oak shavings and linseed oil with sweeter aromas arriving very quickly. Now though the name denotes citrus, we were getting a ton of sherry layered on top of bakers treats. Rich berry compote and peppery wood smoke, the nature of this spirit was more in line with a sherry malt whisky than any grain I’ve had. Big booming richness with hints of a lemon glazed crueller, cigar wrappers and a big spicy punch to finish. The alcohol is present and asserts itself amongst the sweeter components of the dram,Â balancing theÂ spirit out completely. Another definitive favourite of mine for the night.

Another brilliant tasting concluded, I assume that many of the tasters had their eyes opened to a new realm of spirit. If this tasting shows anything, it would be that grain whiskies are not merely a trifle Â cause in the shadow of the malt industry, but an entirely different creature with different characteristics and style. I would hope that, if you are reading this, you feel a little more compelled to give one a try and open your experiences to a whole new genre of tastes.

This entry was posted in Tastings, Whisky. Bookmark the permalink.