First and foremost, I sorry for the delay in blogging, but you havenÃ¢â‚¬â„¢t missed anything! Ã‚Â I have included Ã‚Â old and new information on our recent arrivals Ã‚Â including a few things from new breweries I mentioned in the last post. So here we go.

On the topic of new brewery arrivals, the latest ones to come in areÃ‚Â Heretic Brewing out of Fairfield California, and Boulevard Brewingout of Kansas City Missouri. Both breweries have some incredible beers and we’re truly excited to see them in the province. As well, there will be a few old favorites from Lagunitas coming back to the shop soon along with possible new Baird beers and another couple of BC breweries (*ahem… Driftwood, Dageraad) that will be new to the province.

Enough of that though; let’s get down to business here. There’s like a dozen or more things here to talk about!

Gramarye pale ale from Heretic Brewing.
Just in time for spring, this session pale ale has a generous portion of rye added, giving a pleasant spicy character to an otherwise mild, and crisp session ale. Moderate hops balance the malt perfectly in this easy drinking spring sipper. $7.99 for a 650mL bottle.

Torment dark Belgian strong ale by Heretic Brewing.
Rich, bready malts give a dense and dried fruit character, just as you’d expect in this style. The alcohol content is driven higher with the traditional use of candi sugar, but is still hidden awfully well in the full bodied malt profile. $10.29 for a 650mL bottle.

Old Guardian barley wine by Stone Brewing.
A lot of American barley wines eng up being slightly lighter in color than their European ancestors, and this one is no different. The hugely rich malts in this monster give incredible caramel covered fruit flavors that change heavily as the beer warms up. The generous hops bring out a dryness in the end that clears your palate for another sip. $13.59 for a 650mL bottle.

Extra Hoppy Old Guardian by Stone Brewing.
Just like the standard Old Guardian, this one is just a powerhouse of malt. This special release is loaded with more hops, and is only released in odd numbered years. After these are gone, we won’t see them for a couple more years! $13.59 for a 650mL bottle.

Imperial Russian Stout by Stone Brewing.
Such a thick, chocolaty and spicy beer like this is sure to have a perfect home in the dead of winter right? Well Stone took on a challenge to make a beer so delicious and rich that they could release it out of the wintery season and still have it sell like mad. The result is this beautifully decadent Russian imperial stout that is ready to knock your socks off any day of the year! $12.29 for a 650mL bottle.

Chai-spiced Imperial Russian Stout by Stone Brewing.
If their Russian imperial stout isn’t good enough, try it with the addition of cinnamon, cardamom, clove, ginger, black pepper and black tea and take your taste buds for a ride! This is only released in odd numbered years, so make sure you come and pick one up before it’s gone, only to be seen again in 2017. $12.29 for a 650mL bottle.

Ballyhook Flyer Irish cider by Craigies.
This beautiful dry Irish Cider is cold conditioned through the winter for clarity and to mellow it out. It’s delicate on the palate with great acidity making it perfect for pork, chicken and cheese. Although it’s drinking wonderfully right now, the makers say it could improve in the bottle over the next 2 years. $11.99 for a 500mL bottle.

Nightmare rye IPA by Baird Brewing.
A special release from one of Japan’s best craft breweries. This Rye IPA has a pleasant spiciness to compliment the generous hoppy bitterness. The 7.5% abv is kept at bay with a solid malt backbone. $4.49 for a 350mL bottle.

Kilt Lifter ruby ale by Pike Brewing.
Back in the province after a 2 year Hiatus! A heavy malt profile dominates this Scottish style ale. Little hops are used, but the malt is accentuated with a light peaty smoke that is -to some- an essential part of a Scotch ale. $19.49 for a 6-pack of bottles.

Tank 7 farmhouse Ale by Boulevard Brewing.
This Belgian style farmhouse ale is named after the fermentation tank of the same number. The light but sweet and peppery profile is given the ol’American touch with Magnum, Bravo and Amarillo hops, giving it a grapefruity and zesty zing. $20.69 for a 4-pack of bottles.

Single Wide IPA from Boulevard Brewing.
A hearty contender in the huge north American IPA market, this one brings a balanced profile to the table, full of citrus and a soft -though pronounced- bitterness. On top of all that, it’s dry hopped for that extra fresh aromatic and flavor punch! $14.09 for a 4-pack of bottles.

Brews Brothers collaboration mixer pack.
This monster mix pack comes to us from our brothers and sisters to the west. Parallel 49 brewing reached out to collaborate with 12 different BC brewers to offer this box of 12 different beers. Most of the breweries don’t distribute into the province yet, so this is an excellent chance to try all sorts of goodies from one of Canada’s busiest brewing scenes! $31.40 for a 12-pack of bottles. 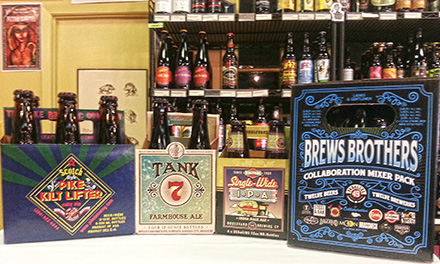 Well that was a lot of beer to go through! These updates will be back to their normal weekly posting after today. A quick reminder that the Cantillon pre-orders have been piling up, so make sure you have yours in! The expected arrival date has apparently been pushed back to early/mid May so as hard as it is, I just have to be patient… and unfortunately the same goes for you! Don’t forget to say hi when you come in, I’m almost always around and love to chat beer! Keep in touch with me via twitter @ShawnsBrewsCGY.

This entry was posted in Beer, Store. Bookmark the permalink.