The second half of the Ardbeg Day Calgary festivities took place on the afternoon of May 31st. Participants gathered at a Calgary Bowling Green to celebrate all things Ardbeg. In the spirit of the soccer theme participants were asked to participate in a series of drills and a foosball tournament. Food was provided by Brazen Meats, and included some delicious haggis meat balls. The event started with an Ardbeg Ceaser, before participants were given the opportunity to sample the 10 Year, Corryvreckan and Uigeadail from the Ardbeg core range! 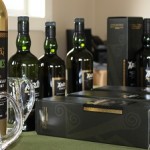 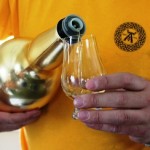 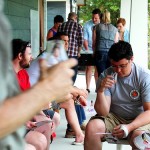 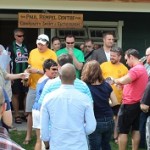 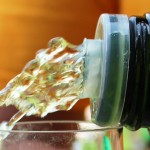 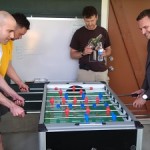 The highlight of the afternoon event was a tasting of the new Ardbeg Auriverdes. The Ardbeg Day 2014 special release. The Auriverdes (Latin for Green and Gold) is a tip of the hat to the distillery’s golden nectar and it’s iconic green bottle. There is a secondary significance to this in 2014, with Brazil hosting the World Cup of Â Soccer, and it’s side known as the Green and Gold! The whisky was filled into cask in 2002, Refill Ex-Bourbon barrels fitted with specially toasted heads. How special? Well the distillery isn’t saying, its a secret. The whisky has been bottled at 49.9%, and is expected to retail for between $125 and $130. Pre-orders for the whisky have been strong, as it is a limited edition. It is not not expected to last long!

The whisky was very well received by all. Here is our Scotch Guy, Andrew Ferguson’s preliminary tasting note, taken from a sample bottle while visiting Islay in May:

After an afternoon of whisky, games and great food, many moved on to Buchanan’s Chop House for the after party! This wonderful event would not have been possible without the support of Charton Hobbs, Moet Hennessy, Ardbeg and the Kensington Wine Market. Special thanks to everyone who attended.

This entry was posted in Community, Store, Tastings, Whisky. Bookmark the permalink.